President Volodymyr Zelensky appealed to western nations to take “meaningful steps” to bolster Ukraine’s military campaign against Russia ahead of a Nato summit aimed at deepening the alliance’s support for Kyiv.

As the war in his country entered its second month, the Ukrainian leader urged the world to provide heavy military equipment to aid his nation’s “struggle for life” in the face of a Russian invasion that has caused widespread destruction, forced more than 10mn people from their homes and left another 12mn trapped in areas ravaged by conflict.

Zelensky, who has launched Scathing attacks on some western nations for their economic links to Russia, said the response from the gathering of Nato members in Brussels on Thursday would show “who is a friend, who is a partner, and who betrayed us for money”.

US president Joe Biden arrived in the Belgian capital on Wednesday night for the first in-person meeting of the leaders of the western military alliance since Russian president Vladimir Putin’s full-scale invasion of Ukraine sent shockwaves through the western world and triggered a considerable overhaul of Europe’s political and economic links with Moscow.

Biden, who will also attend meetings with EU and G7 allies, will rally them to provide increased support for Kyiv and inflict greater pain on the Russian economy by unleashing further sanctions on top of existing measures targeting the country’s central bank, key financial institutions, top officials and oligarchs.

Nato allies are expected to agree further increases in defence spending as Russia’s invasion has sparked widespread concerns across Europe about the continent’s security and defence.

A string of countries, led by Germany, have announced significant increases to their military budgets amid calls from Nato to invest more.

“On national defence spending, I see a new sense of urgency among Allies,” Nato secretary-general Jens Stoltenberg said ahead of the summit. “They all understand that since we now need to do more.”

Member states are expected to pledge more military support for Kyiv at the summit, with the UK set to unveil a pledge for 6,000 “defensive” missiles along with a £25mn financial package for the Ukrainian armed forces.

In a sign of western concern that Putin could seek to escalate the war by using weapons of mass destruction, Nato also plans to send equipment to Ukraine to defend against chemical and nuclear weapons.

Stoltenberg warned that a chemical attack in Ukraine could also lead to chemical agents spreading into Nato allied countries. “Any use of chemical weapons would fundamentally change the nature of the conflict. It will have widespread and severe consequences,” he said.

Nato is also expected to agree to a plan to strengthen its eastern flank by setting up four battle groups of Nato troops in Bulgaria, Hungary, Slovakia and Romania, joining deployments aimed at deterring potential Russian aggression in Poland and the Baltic states. 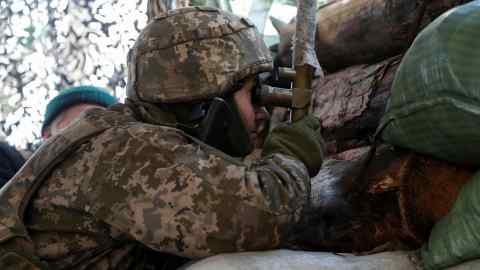 Member states have made clear, however, that they are unwilling to engage in a direct military confrontation with Russia and have rejected pleas from Zelensky, which he repeated again ahead of Thursday’s summit, to enforce a no-fly zone over his country.

A promise by Biden to supply Ukraine with Soviet-era long-range missile systems has become bogged down in difficulties with sourcing and moving the equipment.

Ukraine on Thursday claimed to have sunk a major Russian naval vessel that had docked in the port city of Berdyansk, a city on the coast of the Azov Sea that is controlled by Russian forces.

Russian officials did not comment on the claim, which could represent a significant setback for Russia in the Azov Sea. When the Orsk first docked in the port earlier this week, Moscow’s state media described the event as a breakthrough, as it was the first military vessel to dock on the coast and had delivered a large number of tanks and armoured vehicles for Russian troops.

Russia’s defence ministry, meanwhile, said that its troops had taken full control of the eastern Ukrainian town of Izyum, a strategically important town between Kharkiv and Donetsk with a prewar population of about 40,000. Ukrainian officials did not immediately confirm the assertion.

Boots in trouble as bids fail to show up