Due to the emergence of new variants of the coronavirus, the exploitation of oil reserves in various countries, and the continued increase in OPEC+ production, crude oil prices have fallen since October.

Oil declined for the sixth consecutive week, which was the longest weekly decline since 2018. Because the omicron variant shook the market, OPEC+ continued to increase supply.

West Texas Intermediate crude oil futures fell 2.8% this week. The spread of omicron variants has investors worried about any potential demand shocks, as cases in at least six states have been reported in the United States. Since Tuesday, the Covid-19 infection rate in South Africa has almost quadrupled. At the same time, OPEC and its allies decided this week to add 400,000 barrels of crude oil a day to the global market in January, finally succumbing to consumer pressure.

Ed Moya, senior market analyst at Oanda Corp, said: “The short-term demand outlook is unstable at best. If the United States sees new restrictions, there may be an oversupply in the oil market by the end of the month.” 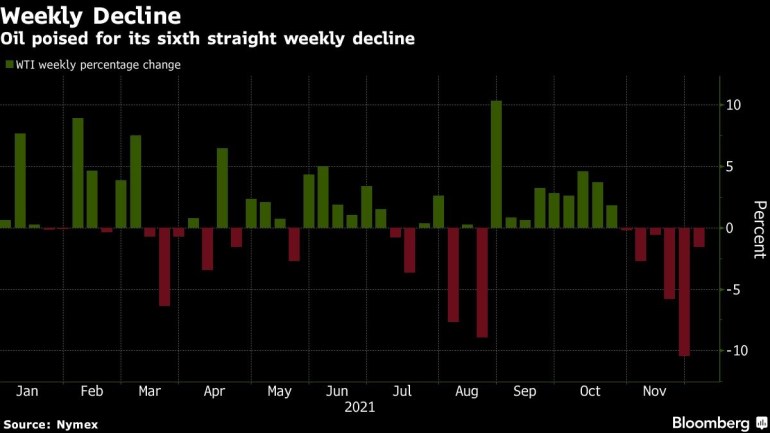 Due to actions taken by major consumer countries to tap their reserves and the emergence of new virus variants, crude oil prices have fallen sharply since late October. Due to lower-than-expected US employment data, the more hawkish Fed was in trouble on Friday. At the same time, the sharp increase in volatility prompted oil traders to withdraw, and open positions in major oil futures contracts fell to their lowest levels in years.

Although OPEC+ decided to continue to supply oil to the market, the organization basically provided the option for prices to change the plan within a short period of time. Before this week’s meeting, the ministers expressed that they were worried about the impact of omicron on crude oil demand, but were trying to figure out how severe the new pressure would become. By effectively maintaining monthly meetings, the alliance can now respond more flexibly to price fluctuations.

At the same time, Europe’s top envoy said on Friday that in Vienna, diplomats trying to restore the nuclear agreement between Iran and the world’s powers are facing major challenges that need to be urgently resolved. The talks are scheduled to resume in the middle of next week.