West Texas Intermediate crude futures were trading near $113 a barrel and were on track for their best weekly gain since mid-February. Rising demand for motor fuel and dwindling inventories underscored a fundamentally tight oil market ahead of the summer driving season, even as broader economic concerns rattled stocks. us. Retail gasoline and diesel prices surged to record levels.

“There is still a disconnect between the risky financial market associated with crude oil financial assets and the physical market trying to digest SPR releases to meet product demand,” said Rebecca Babin, senior energy trader at CIBC Private Wealth Management. Fragmentation and turmoil – what could end up being a brutal summer for energy traders.” 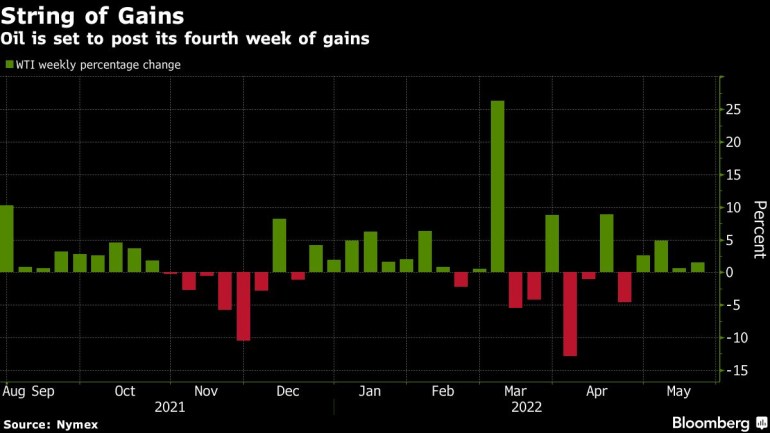 Crude prices have surged nearly 50% this year, also helped by Russia’s attack on Ukraine, which sent shockwaves through the market. While the US and UK have announced bans on Russian exports, flows to Asia have increased. China is seeking to replenish strategic reserves with cheap Russian oil, even as officials struggle to contain the Covid-19 outbreak. India also increased purchases.

Signals from China were mixed on Friday. Shanghai has detected its first Covid-19 cases outside the quarantine zone in six days, even as banks slashed key interest rates on long-term loans to record levels to boost a slowing economy. That raises questions about whether easing the city’s lockdown will be affected.

Traders are also keeping a close eye on the refined oil market as a global inventory squeeze coincides with the start of the summer driving season. On Wednesday, U.S. crude oil data showed continued market tension, with gasoline inventories falling to the lowest level since December and demand picking up.

Rising oil prices have led to the fastest inflation in decades, prompting the Federal Reserve to vow to keep raising interest rates until there are clear signs that price pressures are easing. That spurred a dramatic shift in investor risk appetite, with volatility in stocks, bonds and commodities.